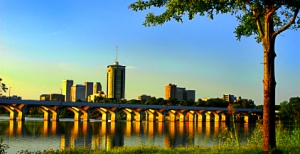 Tulsa’s rejuvenated culinary scene.
Tulsa is in the throes of a dining renaissance – The Boston Globe

Tulsa’s Gathering Place, an ambitious public park. Its active commons can function as one of the city’s central open spaces.
Transforming Tulsa, Starting with a Park – The New York Times

The 66-acre park, which is open to the public for free, includes playgrounds, gardens, a skate park, a BMX track, a concert venue and a number of restaurants. Tulsa’s The Gathering Place – Time’s Greatest Places 2019

Vintage Wine Bar (Tulsa, Oklahoma)
The Most Beautifully Designed Bar in Each State in America

This has been a stand-out year for Oklahoma’s restaurant scene, and it’s only growing.
Tulsa’s Restaurant Scene Just Got Even Better – Food and Wine

From housing and culture to education and employment, Oklahoma City has an energy all its own, and there is room for you at the table.
Oklahoma City’s Welcome Guide

Portlandia on the Great Plains? Not just yet—but it feels like it could happen.
We Can’t Believe How Cool Oklahoma City is Being Right Now – Food and Wine

Oklahoma City’s $45.2 million whitewater rafting and kayaking center. Named a U.S. Olympic & Paralympic Training Site by the U.S. Olympic Committee, the OKC Boathouse Foundation offers one of only a few training sites across the nation to earn this prestigious designation.
River Sports Rapids