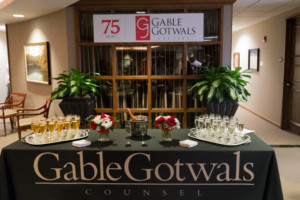 What began as a two person enterprise between Ellis Gable and Charles Gotwals in 1944, GableGotwals has grown into a full-service law firm that employs approximately 100 attorneys and more than 60 professionals with offices in Oklahoma City and Tulsa, OK, and San Antonio, TX.  GableGotwals represents a diversified client base across the nation including Fortune 500 corporations, privately owned companies, entrepreneurs, foundations, and individuals. Though Oklahoma-based, our connections and reach are global.

One of the key values the founding members of the Firm have passed on is giving back to the communities in which we serve. In honor of our 75th anniversary, GableGotwals has committed to serving an additional 750 community service hours in 2019. In addition, GableGotwals established a $7,500 scholarship at The University of Tulsa College of Law in memory of former shareholder, Oliver Howard, who similarly give back to the community.

As the celebrations continue, the City of Tulsa Mayor, G.T. Bynum, has proclaimed September 3, 2019 as GableGotwals Day in honor of this milestone. GableGotwals is committed to continuing to serve as a leading corporate citizen for generations to come.