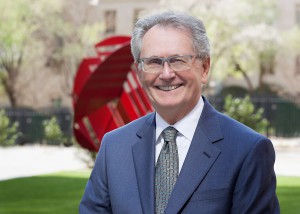 GableGotwals was established in Tulsa in 1944 for nearly four decades as the sole office, what prompted opening an office in Oklahoma City?
In 1982, Penn Square Bank, a commercial bank in Oklahoma City, failed due to the large amount of poorly underwritten energy-related loans it sold to other banks. Losses on these loans led to significant financial problems for a number of those banks. Subsequently, the FDIC uncovered numerous criminal violations. As the Firm had substantial experience representing the FDIC, the Oklahoma City office was formed to assist with the process.

What was the Oklahoma City office like?
We established an office in the First National Center, staffed by a full-time secretary and Firm lawyers working on FDIC cases. Although lawyers often stayed and worked in Oklahoma City for a few days each week, none permanently resided in the city. The office closed in the mid-1980s when the work concluded.

So the office was briefly established for a specific need. How was the existing Oklahoma City office established?
As the Firm’s client base began to expand in the mid- to late 1980s from its traditional banking, real estate, and insurance clients to include oil and gas clients, the Firm once again considered whether an Oklahoma City, or even a Houston office, would be appropriate. By then, our lawyers were litigating and advising on matters throughout Oklahoma and in multiple states, particularly in Texas and New Mexico. In the fall of 1994, the regional counsel for one of the largest global oil companies insisted that GableGotwals have an office in Oklahoma City or he would move the company’s Oklahoma legal work to an Oklahoma City firm. King and King were highly respected oil and gas attorneys and were an excellent fit for the Firm’s clients and culture. Today, the Oklahoma City office has more than 20 lawyers, most of whom practice in the litigation field and oil and gas related matters.

How did you help instill the Gable culture with a new group of lawyers?
I moved from Tulsa to Edmond (where King & King were located at the time) in February 1995 to work with the Kings to grow the Firm’s new office. Although I moved with the intention of returning to Tulsa after two years, the two became 23.

Sudden expansions can create challenges, but we always maintained the Firm’s standard and reputation for providing our clients with the highest quality legal representation and excellent results. Our team concept, not only within the Firm’s staff and lawyers but equally importantly with our clients, created a work atmosphere that has led to our continued growth and expanded client base.