GableGotwals Welcomes the Attorneys and Staff of the Glass Law Firm 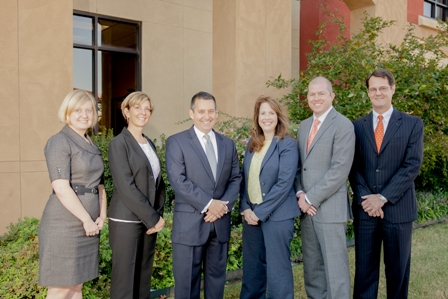 The Glass Law Firm’s founder, Robert Glass, began his legal career at GableGotwals in 1984. After working at firms in San Antonio and Tulsa, Robert founded his own firm in 2000. Now, Robert is returning to the place where his legal career began and bringing with him an outstanding team of attorneys and other professionals to GableGotwals.

The Glass Law Firm has a superb reputation for skillful and effective legal counsel, with distinction and concentration in the area of health care law. The group is also known for their experience in the areas of banking/corporate finance; business transactions; restructuring, workouts and bankruptcy; litigation; construction; labor and employment law; real estate; representations before governmental agencies; tax; wills, trusts, estate planning and probate; and insurance law.

Robert Glass joins our firm as a shareholder. He has been included in the Best Lawyers in America in the areas of health care and bankruptcy each year since 2001. Additionally, he has been listed in Super Lawyers for his business litigation practice every year since 2006 and in Chambers for corporate and commercial law since 2011. Martindale-Hubbell has given Robert an AV rating. Robert received his law degree, as well as his undergraduate accounting degree, from the University of Texas.

Jared K. Nelson joins the firm as an associate attorney. He brings experience to GableGotwals in the areas of health care law and general business transactions, including business formations and reorganizations and structuring business ventures. Jared earned his law degree from the University of Tulsa and his bachelor’s degree from Texas A&M University.

Meagen E. Burrows joins the firm as an associate attorney. She has been focused primarily in the areas of health care law, general business transactions and Corporate law. Meagen earned her law degree from Seattle University School of Law and holds an undergraduate degree from Oklahoma State University.

Susan I. Jordan joins GableGotwals as an of counsel attorney. She has devoted her legal practice to the representation of hospitals, physicians, nurses and other health care providers. Susan is the founder of Tulsa-based Jordan Law, where she will continue to also practice. Susan earned her law degree from Southern Methodist University School of Law and holds an undergraduate degree from the University of Texas at Arlington.

LeAnn Drummond Ellis joins the firm as an of counsel attorney. She brings varied legal experience in the areas of tax law, wills, trusts, estate planning, guardianship and probate. LeAnn is also in private practice with Ellis and Ellis based Stillwater, where she lives full-time while commuting to Tulsa at least one day a week. LeAnn earned her law degree from the University of Oklahoma School of Law. She also holds a bachelor’s degree in accounting from Oklahoma State University. Martindale-Hubbell has given LeAnn an AV rating and she is a fellow of the American College of Trust and Estate Counsel.